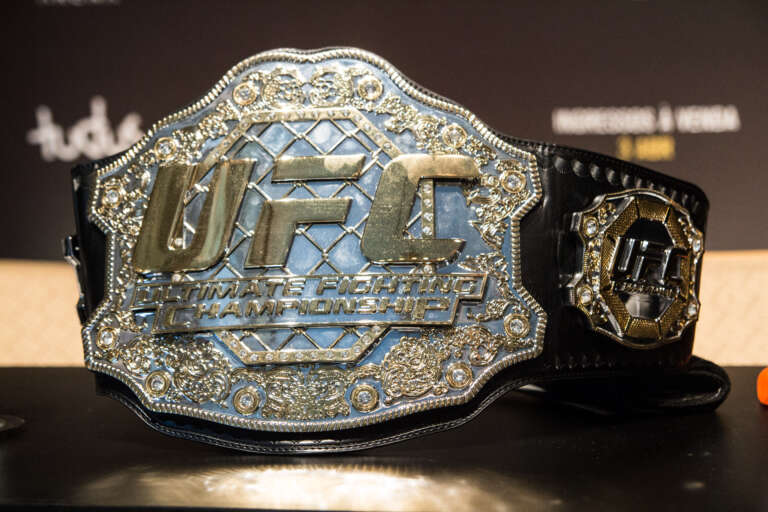 The Ultimate Fighting Championship, better known as UFC is a US-based mixed martial arts organisation. The UFC has seen a lot of growth over the years and is one of the most successful combat sports organisations that has ever existed. But what makes the UFC so special and successful? Check out the most important facts about the UFC here. 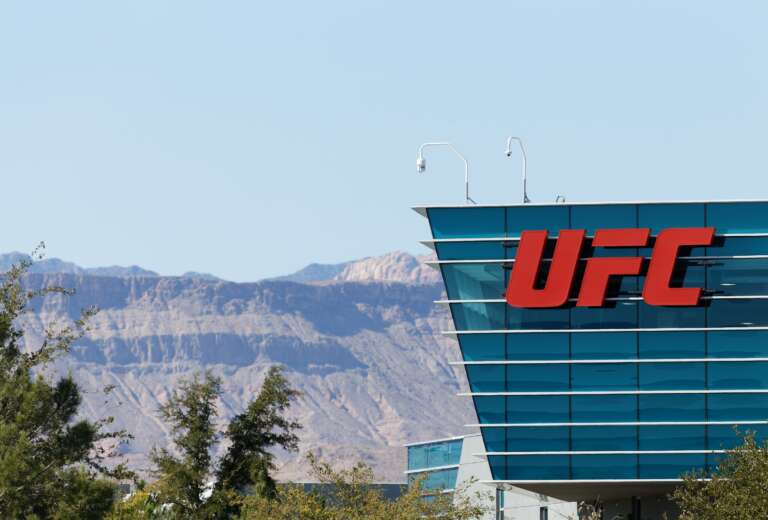 The UFC’s headquarters are located in Las Vegas.

What is the UFC?

There is no denying that the UFC has made mixed martial arts what it is today: one of the most popular combat sports of our time. Among other things, trained boxers come up against specialists in wrestling. In other words, different martial arts are mixed together – which is why this combat sport is known as Mixed Martial Arts. This is exactly what makes the UFC so exciting and its fights so unpredictable. 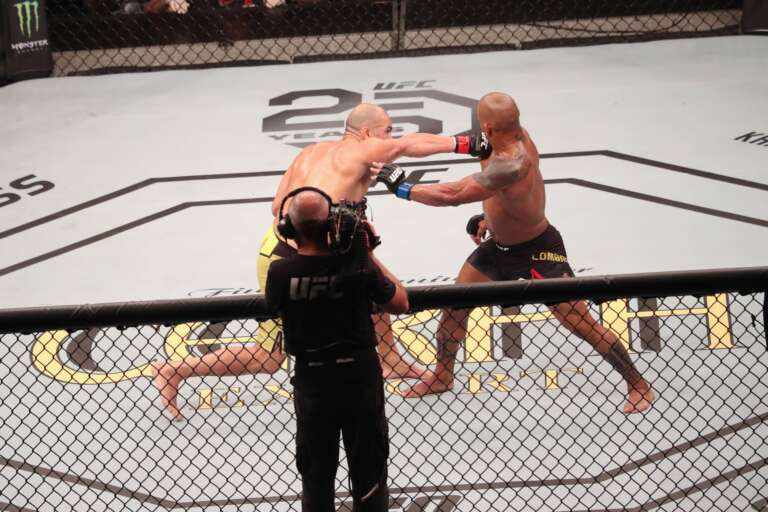 Not every MMA boxer fights in the UFC, but every UFC fighter practices MMA.

What is the difference between MMA and UFC?

In the boxing universe, the UFC and MMA are well-known terms. Yet still many ask themselves what the differences are between the two. We want to get to the bottom of this and explain the difference between UFC and MMA.

The difference between MMA and UFC is that the UFC is a combat sports organisation that simply practices the combat sport of MMA. A good comparison can be made between AIBA and boxing. While AIBA is the promoter or organisation, boxing is the sport that is performed.

The UFC has become so big that many assume that the UFC is itself the combat sport. However, this is not true. UFC means Ultimate Fighting Championship, while MMA stands for Mixed Martial Arts.

Even if the opponent is lying on the ground, you can still hit him.

What are the rules in the UFC?

The UFC has managed to make MMA an established part of the combat sports world, it has now reached or even surpassed the level of popularity that boxing has. However, not everyone has welcomed the UFC and its associated combat sport with open arms. Many sceptics compare fighting in the Octagon to the fights of the gladiatorial era. It cannot be denied that MMA can be dangerous. However, this is also true of all other combat sports that involve fighting.

And yet UFC’s brutality is often more a matter of appearance than reality to the untrained eye. People without proper knowledge of MMA do not recognise the technique and art of the combat sport, but rather the blood and the quick knock-outs and the battering of downed opponents. The UFC is tough and Mixed Martial Arts is by no means a safe sport, but there is a set of rules that must be followed. 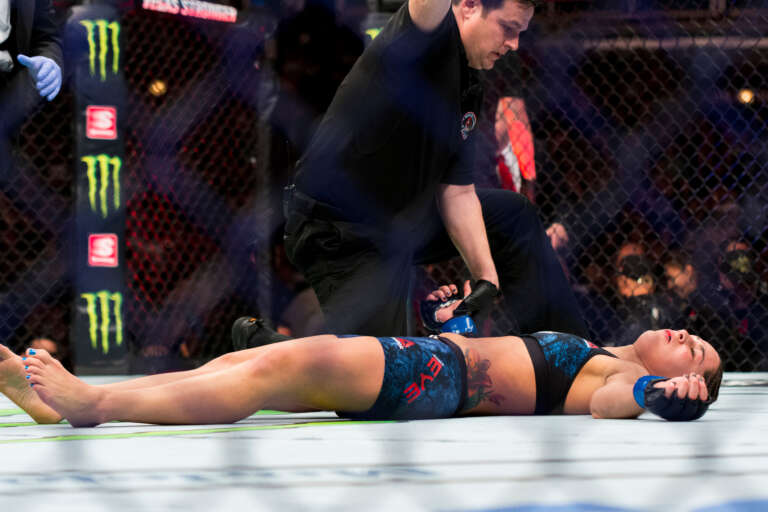 The fight will be stopped by the referee if the opponent surrenders or cannot continue fighting.

The set of rules used in the UFC is known as the “Unified Rules of Mixed Martial Arts”. These define framework conditions such as clothing and weight classes, as well as rules for the fight itself, such as particular fouls.

The fights are barefoot with the upper body exposed. The fighters wear shorts without buttons or zips. They may only reach up to the knees. In addition, protective equipment must be worn. This includes a mouth guard, groin protector and 110 gram fist protectors. Boxing equipment is stipulated in the rules and is mandatory for UFC fighters.

In the next sections we will go into more detail about what is forbidden in the UFC, how long a round lasts and what weight classes there are. 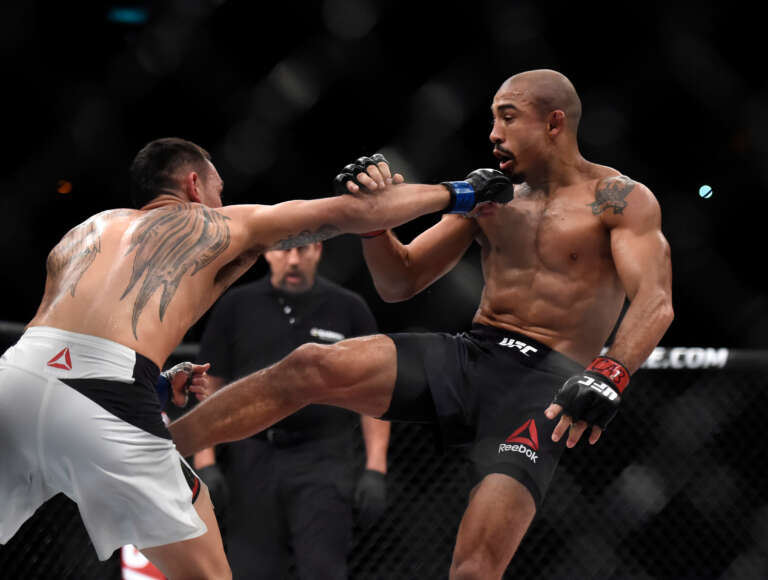 Currently, there are 27 points in the rulebook of the UFC.

What does the UFC forbid?

An outsider watching a UFC fight might assume that a lot is allowed from a fighting point of view. But when you look at the fouls, you quickly realise that there are clear restrictions set out by the UFC. We have listed all fouls, for example illegal attacks or unsportsmanlike conduct, which can lead to a warning, point deduction or disqualification.

There are currently a total of 27 fouls punishable in the UFC: 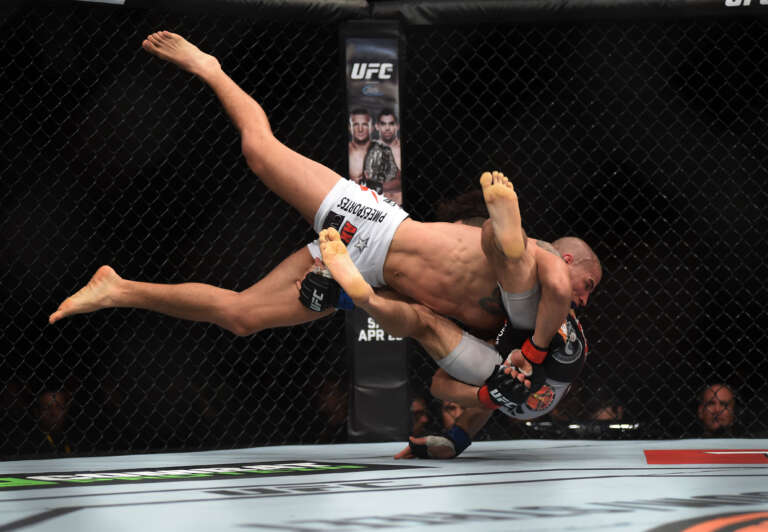 Inside the cage, the opponent may be thrown anywhere.

If there is a foul, the Referee may award penalty points at his discretion. In the event of a contestant being unable to fight due to a deliberate breach of the rules, disqualification is possible. The victory would thus be awarded to the fouled UFC fighter.

It often happens that a fight is decided even before the first 5 minutes are over.

How long does a round last in the UFC?

A round in the UFC always lasts five minutes. The number of rounds is basically equal to three rounds and up to five rounds for main events or title fights. The fighters always have a one-minute break between rounds. However, it is also possible to end the fight beforehand by knockout, technical knockout, tap out or verbal submission. 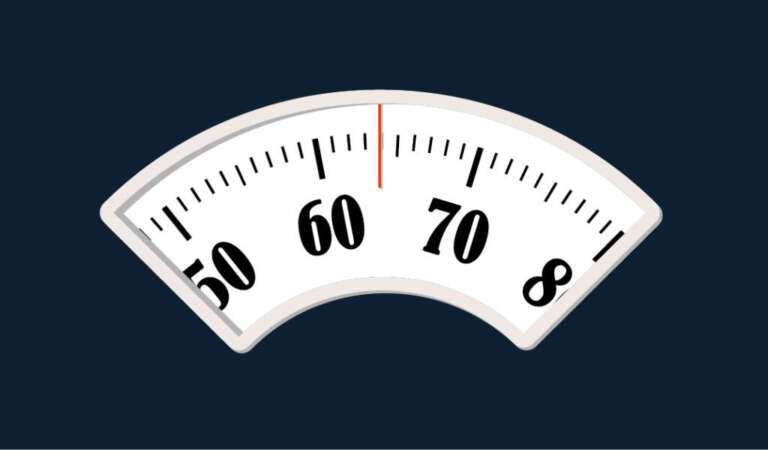 In the UFC are different weight classes in which you can fight.

What weight classes are there in the UFC?

Just like in boxing, there are also different weight classes in MMA and the UFC. These exist in order to create the fairest possible conditions. In the early days of the UFC, these weight classes did not exist. There were also fights in which the weight difference was sometimes up to 40kg. Today it all looks quite different.

The following is a list of the current weight classes in the UFC: 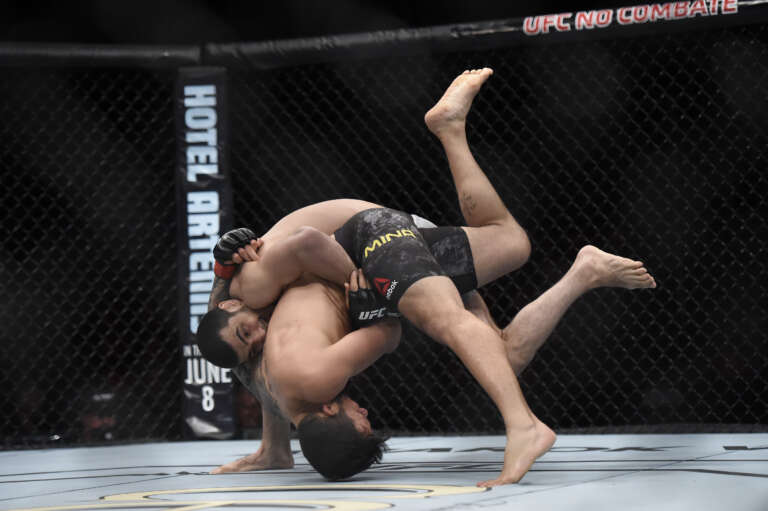 UFC fighters have to learn many different fighting styles to be successful.

Just what exactly is a UFC fighter?

A UFC fighter is an athlete who practises mixed martial arts. This means that they do not only master one martial art, but several. It often happens that UFC fighters come from another combat sport, such as boxing, and then acquire other martial arts in order to use them in the Octagon at the right moment. That is exactly what MMA is all about: The mix of different martial arts and combat sports in order to adapt as well as possible to the opponent in the fight.

A UFC fighter is therefore automatically an MMA fighter as well. As you have already learned, the UFC is merely the organisation, while MMA is the actual combat sport itself. But how does one become a UFC fighter? We will now answer these and other questions. 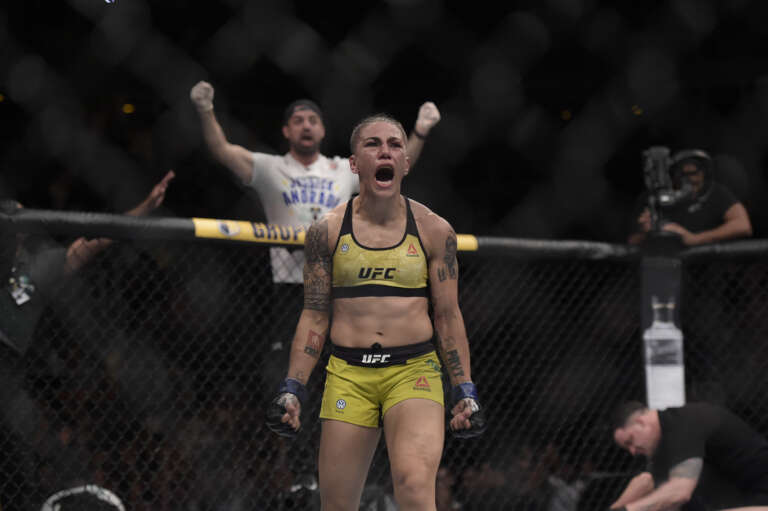 As an athlete, you have to make a name for yourself before you can fight in the UFC.

How do you become a UFC fighter?

Become a UFC fighter and celebrate success like Conor McGregor or the former light heavyweight champion Jon Jones or other UFC legends. A dream and goal that many MMA athletes harbour. But how does one become a UFC fighter?

First of all, you have to fulfil the right basic requirements. Specifically, for you this means: Have fighting experience in different combat sports. Many successful UFC fighters started out as champions in another martial art before they switched to MMA and consequently to the UFC. A good example of this is middleweight champion Israel Adesanya. He began his sporting career as a kickboxer, where he enjoyed numerous successes. In 2012, Adesanya made his debut in mixed martial arts. In 2018, he signed a contract with the UFC, securing the middleweight title in 2019.

Not everyone has the skills to become a UFC fighter. It takes a lot of perseverance and skill. You need to master multiple martial arts and perfect them. It is also important to stand out and make a name for yourself. If you are still unknown in the martial arts world, it will be difficult to get a foothold in the UFC or even to sign a possible contract with the UFC. 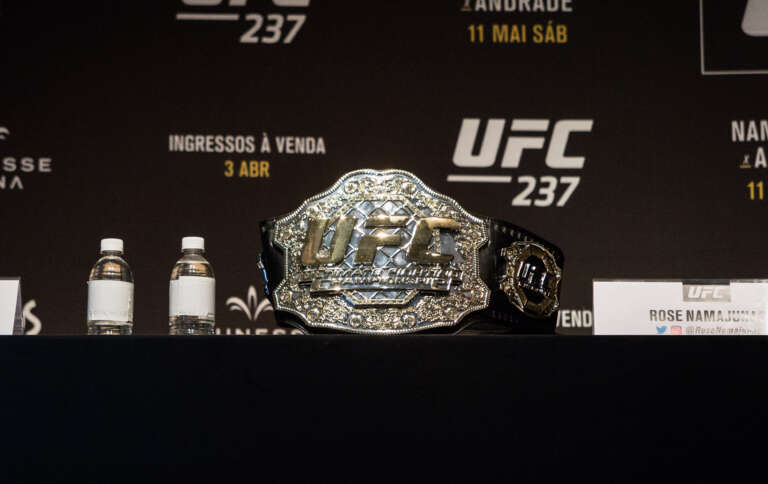 Very successful UFC fighters can win two belts for themselves at the same time.

Who is the current UFC champion?

To give an immediate answer: There is no single champion in the UFC. Each weight class has a separate champion who holds a title. However, it can also happen that a UFC fighter could secure titles in two weight classes at once. For an overview of the current UFC champions we have created a list with the respective weight class.

Here are all the UFC champions listed by weight class (men):

Here are all the UFC champions listed by weight class on the women’s side: 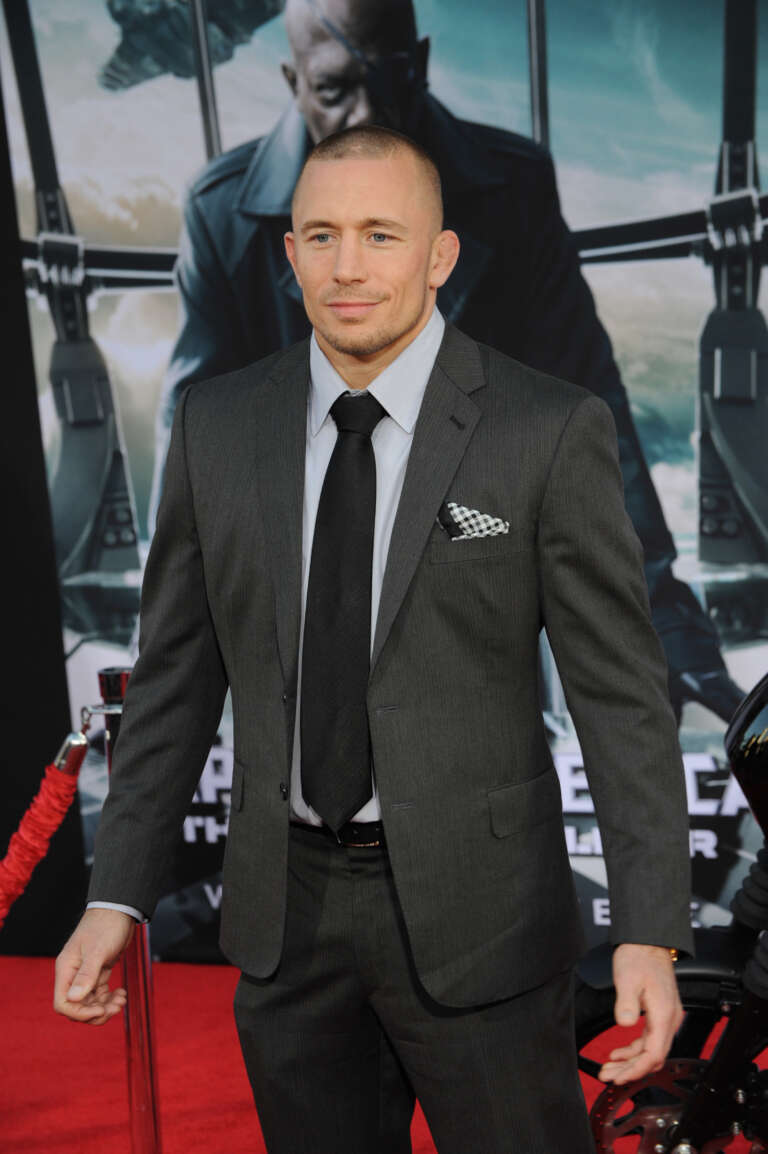 George St. Pierre at the premiere of a film in which he plays a role.

Who is the best UFC fighter of all time?